ATPLs at Bristol Groundschool …… The Final

Since I last wrote, a lot has happened. It was the last 4 weeks before undertaking the Module 3 ATPL exams – principles of flight, performance, operational procedures, mass and balance and VFR/IFR communications, and the revision was ramping up. Since then, I’ve attended the revision brush up week at Bristol Groundschool in Clevedon and sat the final exams the following week. 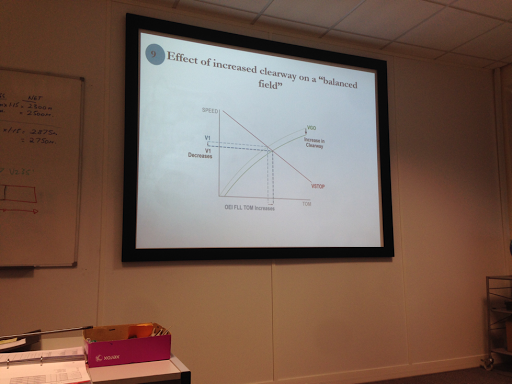 Bristol Ground School brush up week- lesson on Performance
Module 3 for me was a mixed bag, some very intense subjects like Principles of Flight or Performance alongside some less intense subjects like Communications or Operational Procedures, I sat the six exams over three days and felt I’d done ok all except Mass and Balance. During the mock tests I was taking I was scoring high for Mass and Balance so I was reasonably confident the ‘real thing’ would be similar. No. It was far from it! Lots of reworded new questions requiring lengthy calculations which meant I failed to finish the exam in time, I walked out of that exam room feeling I would be very lucky to have passed it… 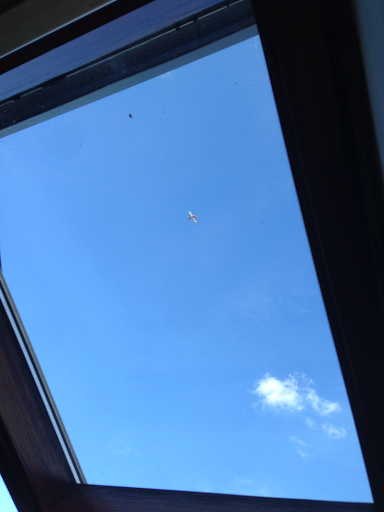 A study distraction or inspiration? During my second week at Bristol Groundschool while I was taking my exams I stayed in a super cottage just a stone’s throw from Bristol Airport so jet noise nearly constant! This was my view from the hallway roof window. Definitely an inspiration during long long hours of revision
Results day loomed and I was pleased to say I passed all except that doomed mass and balance exam! I wasn’t too surprised, it was the toughest exam to date and my gut instinct didn’t fill me with optimism! Was I unprepared, too tired ( it was the last day, second to last exam), complacent, or misreading the questions? Who knows, I’m not one to make excuses!
I was happy with all other results so I just saw the positive through the failure and worked hard to revise further and practice as many mock tests and questions as possible. I was determined that I would pass the exam second time around! I booked the resit for two weeks later at the CAA at Gatwick as I was keen to get it done whilst my brain was still engaged in ‘study mode’ , before I forget it all! 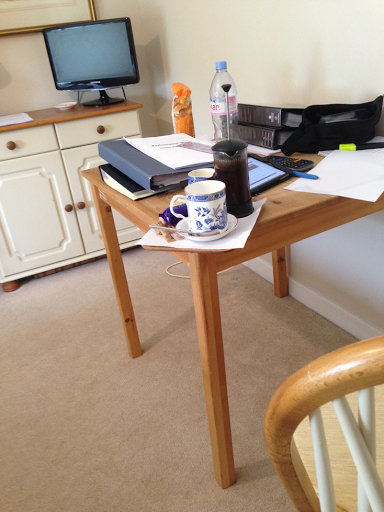 Revision fuel- coffee and biscuits
Exam day arrived and I made my way to the CAA at Gatwick. I signed in and nervously waited to enter the exam room. Time soon passed and before I knew it I was into the exam working my way through it, quickly but accurately! I managed to finish in time with 5 minutes to spare so I triple checked all answers and felt I’d given it my best shot. I vacated the CAA feeling like I’d done better but unsure how much better as it was another tough one!
Luckily by taking the exam on the Thursday meant I had to wait less than 24hrs until results day. After an anxious wait I was greeted with good news.  I opened the email at work, I had passed! And passed well with 90%! I was ecstatic and it took a while for it to sink in! Not only was this a pass but it was monumental as it marked the last of all 14 ATPL exams!!
All of that study and revision that had completely taken over my life was now complete! It was like turning off a switch! Obviously this is just a small step on a long ladder to reach my goal so I know study will never be too far away, and as they say in aviation-you never stop learning.
Throughout my study I’d like to thank my fiancé Char who stood by me all the way through it and has had to put up with me studying away until late in the night, on days off and even during some holidays! It goes without saying that I’m thankful to all family and friends and colleagues and customers at work for their support and encouragement. Lastly my success in passing all ATPLs would not have been possible without the superb tuition, content and support from everyone at Bristol Ground School, I can’t recommend them highly enough! I’m thankful for the opportunity both The Air League and Bristol Ground School gave me when I was presented with the ATPL scholarship in 2005, without them, I wouldn’t be where I am now…
The next step involves me climbing back into an aeroplane and building hours….!
Till next time, thanks for reading
LinkedIn Twitter FaceBook Instagram