The UK Government has announced that, with effect from 31st December 2020, the UK will be leaving EASA.  There is clearly an implication for pilots studying for their commercial licences.  The purpose of this blog is to advise on those implications. The advise is subtly different, depending on the likely date of issue of your CPL/IR. This is based on the advice from the CAA Brexit website

Is your licence being issued in 2020?

If your EASA Licence is issued by the UK CAA before the end of 2020 the current advice from them is that it will become a UK licence after that date, and you would lose EASA privileges.

If your licence is issued by another EASA State before the end of 2020 you will retain EASA privileges after that date but be unable to operate UK registered aircraft. However, the UK will allow some EASA licence holders referred to as ‘recent UK-issued Part FCLs’  to have the equivalent UK licences issued in parallel to EASA licences, without additional training or testing, for a period of up to 2 years.  We interpret ‘recent UK-issued Part FCLs’ as meaning ‘people who in the recent past held a UK licence issued under EASA Part FCL, such as for instance a PPL issued by the UK under EASA rules’.

Although the UK CAA have said that they will allow the conversion of non-UK issued EASA licences to UK CAA licences without any further training, EASA have not reciprocated.  This means that it is logical to aim for an EASA licence, because then ultimately you can hold both licences.

Have you started training, but won’t be issued a licence in 2020?

In this case you will still need to decide whether to aim for an EASA licence or a UK licence.

If you are training for an EASA licence your State Of Licence Issue (SOLI) must be an EASA Member State, and after 2020 the UK will not be a Member State. You must therefore choose which other European State to have as your SOLI.

If you already have a UK PPL then the UK CAA will hold your licence records now and will, until the end of the year, be your EASA SOLI. There is a procedure set out to transfer the SOLI to another State but the advised last date to start this procedure is now passed. The alternative path is to leave your PPL in the UK and let it become a UK PPL rather than an EASA PPL at the end of the year. At that point (or before if you think you can get away with it) get a new initial Class 1 in the EASA State of your choice. This State will then be your SOLI and hold your records.

If you are training for an EASA licence you can start the ATPL theory with any ICAO-compliant PPL. The subsequent professional courses must all be completed at Approved Training Organisations (ATOs) holding EASA approvals. This does not mean you necessarily need to go to Europe, although you can; Bristol Groundschool, the Wings Alliance and many UK-based ATOs have anticipated this rule by arranging for their EASA approvals to be retained either by working directly with EASA or by establishing a presence in an EASA member State.  Our recommendation is that you check with your ATO, if it is UK based, to ensure that they have an EASA approval in place so they will continue to be able to provide EASA approved training after 2020.  They will also need to have arrangements in place for EASA testing.

For flight tests, you will need to check with UK based ATOs what their flight test arrangements are.

There is a potential complication if you have already started a series of ATPL examinations with the UK CAA intending to get an EASA licence but are unable to complete them before 31st December 2020.  We understand that the UK exams you sit before 31st December 2020 will be recognised by Austro Control and that you may apply to them to complete the series, but this has not yet been confirmed in writing. Our advice, if you have not already started your examinations, is to do them with Austro Control or another non-UK EASA member state and avoid this potential pitfall.

If you are aiming for a UK licence then take your Class 1 medical in the UK. All your subsequent training should be in an ATO operating under UK CAA approvals. Many UK ATOs, including Bristol Groundschool, will maintain UK Approvals alongside EASA approvals. At the time of writing it looks unlikely that you will be able to take flying courses or tests for a UK licence at an ATO that does not have UK CAA approval.

There is a potential complication if you have already started your ATPL exams with another EASA State, such as Austro Control, and are unable to complete the series before 31st December. In this case the UK have said you can complete the series taking UK CAA exams, and they (the UK CAA) will recognise the EASA passes so far for issue of a UK licence. 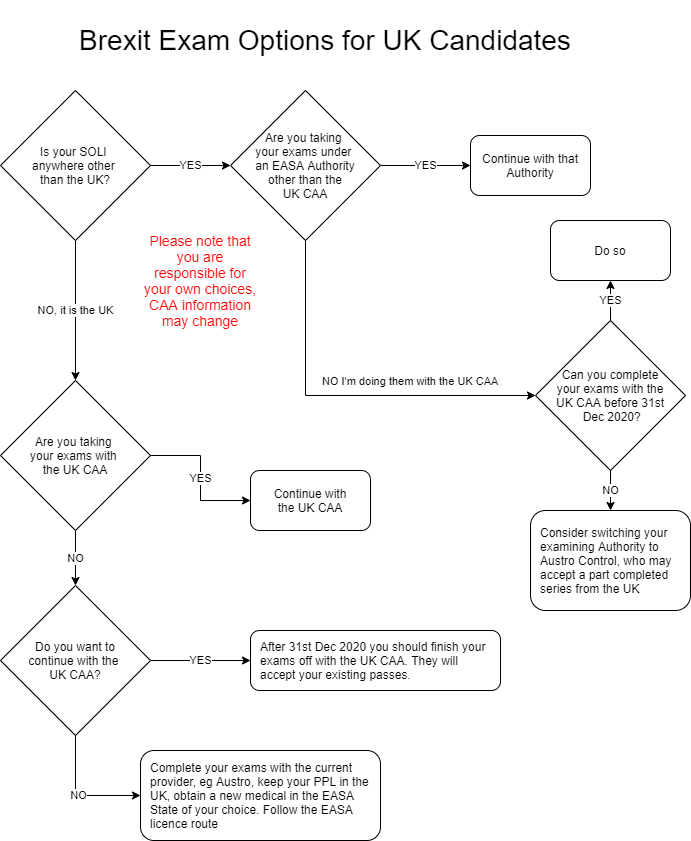 Summary of the UK leaving EASA

Find out more or adjust your settings.